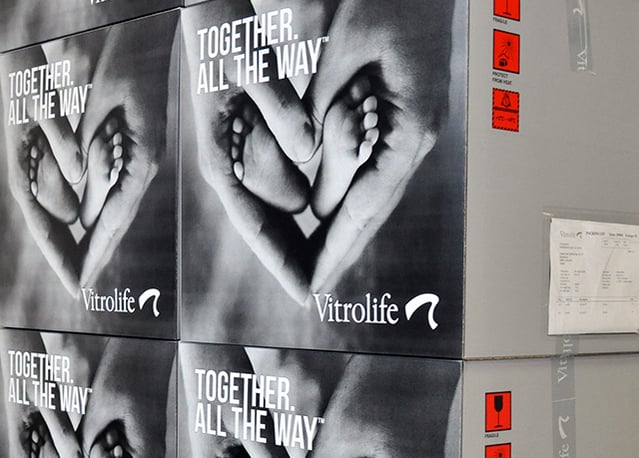 Culture media for IVF can go out of specification during transport for different reasons. This may be detrimental to the product, but not always. In this blog post I will explain what happens to the media when it gets too warm or too cold.

Culture media is designed to withstand being warm for several days, otherwise it could not be used in IVF. The media is kept at room temperature when produced so that all ingredients will dissolve easily and is not placed in cold storage until filled into bottles.

The main concern is that the media may be subjected to too high or low temperatures in the time between production and use. Although packed and transported to remain at the correct temperature under normal circumstances, sometimes things can go wrong. The cold chain might be broken due to e.g. malfunctioning refrigerators, extreme heat or freezing temperatures, making it difficult to know if the media are still OK to use when arriving at the clinic.

What happens when the temperature is out of specification?

There are two main things that may happen: the media can freeze or become too warm. Both may be detrimental to the product, but that is not always the case.

It takes some time for the media to freeze even if the temperature is below zero. The transport box and the thermal mass of the shipment work both ways and slow down freezing as well as warming. In practical experiments we have seen that even if the transport box is kept at -6 °C for up to three and a half hours, the media will still not freeze.

Even if the temperature inside the box goes even further below zero, the media will not freeze immediately as it is easily super-cooled and will not form ice crystals. The normal recommended storage conditions are +2 to +8 °C, but the +2 is only there to give a safe margin to reduce the risk of freezing if something goes wrong.

Eventually the media will of course freeze and have to be discarded. The main risk is that the first ice crystals will form from almost pure water and as the freezing progresses the non-frozen part of the media will have an increasing concentration of salt, protein and other components. The media will become inhomogeneous and when it has finally thawed there is a risk that the media will be hard to reconstitute in a way that means all ingredients are fully dissolved.

The protein may also denaturate as it will be kept in the non-frozen media with wrong pH and osmolality. If you suspect that a medium has been frozen and then thawed, look towards the light and wiggle the bottle gently looking for “threads” with a different refractive index as this is a telltale sign of uneven concentration due to freezing. 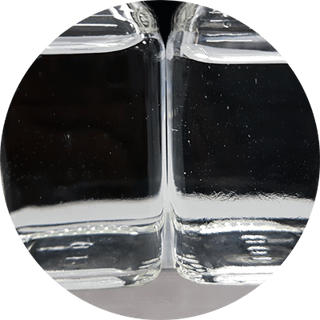 "Threads" can be seen in the bottle to the right

There is one exception when it comes to freezing and it is oil. Oil will not freeze when it goes below zero degrees, but there may be some cloudiness. This is because the long molecules have reduced solubility in cold oil, but once the oil is warm again they dissolve without any negative effect on the product.

If media are kept warm for an extra day, they will not turn toxic right away, but will degrade to some extent. Some manufacturers have put in a safety margin so that all stability tests are performed with a slightly elevated temperature simulating a transport temperature of up to 12°C for a week.

Components such as mineral salts will not degrade. Vitamins, carbohydrates and proteins will degrade, but as long as the media are kept dark the process is a slow one. The main process is oxidation and the concentration of the active components will decrease over time. Through deamination, amino acids and proteins slowly release ammonium ions that have been shown to have a negative impact on the embryo. The process is slow, so one day more or less at somewhat elevated temperatures will not make any noticeable difference, but an extra week will definitely have an impact that may be of importance1.

How to calculate the rate of degradation

The rates of chemical reactions that lead to degradation are mainly dependent on the concentration of the reactants (primarily oxygen) and the energy available in the solution (temperature).

Each reaction has what is called activation energy, which can be visualised as the speed at which two molecules collide. If they hit each other fast enough there will be a reaction, otherwise there will not be a reaction at all. The necessary speed, or activation energy, varies depending on the reaction, but we can use an average of 83 kJ/mole that is quite close to the real value for most reactions. It is possible to calculate the reaction rate by using the Arrhenius equation:

Without going into detail, if real numbers are put into the equation the result is that increases in temperature of +10°C will double the rate of degradation. This is only true if there is not a specific threshold temperature at which new reactions such as denaturation of proteins may occur. The albumin in IVF media will be stable at least up to a temperature of 60°C, so as long as the temperature is lower than this, the Arrhenius equation can be used.

Now that we know degradation goes twice as fast when the temperature is increased by +10°C, we can make some interesting calculations for the media during transport. Assume e.g. that stability studies have shown that a medium is stable enough to be used in embryo culture for 12 weeks after production. If the manufacturer then stores the medium in a very good cold room that keeps the temperature close to +2°C before it is shipped, the media will age slower than it did during the stability studies. This gives a margin so the medium can subsequently be kept at a temperature above +8°C and still not degrade so that it becomes unusable.

It is a problem that the end user cannot see this, but the manufacturers sometimes put logging thermometers in the shipments in order to monitor how the temperature varies when shipping to various parts of the world. When the temperature sensors come back to the producers, they summarise the effect on the product for each time period and calculate a MKT, Mean Kinetic Temperature.

The equation looks very complicated, but it is simply the sum of the reaction rates for each measured period during shipping; this is then converted back to the temperature the product should have had to degrade to the same extent if it was kept at a constant temperature.

As seen above, it is not the temperature on arrival that determines whether or not the product is fine to use. Logging thermometers are not included with every shipment, but the manufacturer have validated each packing system so that they know that the MKT stays within acceptable limits when a shipment takes up to six days (depending on the size of the box and the amount of ice used). 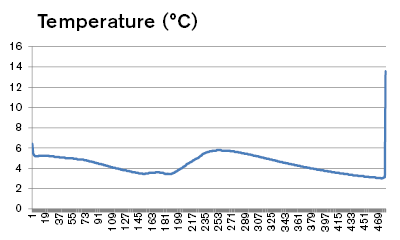 Temperature profile for an actual shipment lasting three days and seven hours, one reading per 10 minutes 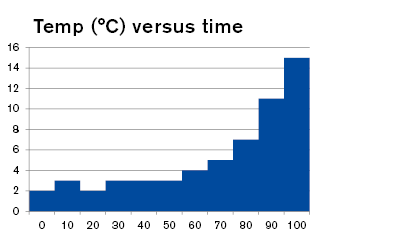 By using the method of MKT calculation we will get a much larger contribution to degradation at the end of the shipment when the temperature reaches 15°C, but the MKT temperature is still only 5.5°C and this is well below the safe limit. Such calculations can easily be performed using Excel data sheets and most of the software programs for many logging thermometers have integrated functions that calculate the MKT automatically.

Unless it has been unusually warm or cold, the products stay fresh in the transport box for the duration of the shipment, even if it may feel slightly warm on arrival. If a shipment is delayed for an extended period of time, however, it is a different story, and it will be necessary to check the temperature on arrival to see if it feels warm. If the media feels warm, this indicates that the media may have been too warm for a too long period of time. In this case, the safest course of action is to contact the supplier and order new media.

Göran is a part of Vitrolife´s research team. With his solid background in Chemistry and special ability to straighten out the most crooked question marks he certainly lives up to the title on his business card – Senior Specialist.

How Vitrolife prepares for the new European Medical Device Regulations

Quality and workflow efficiency - two sides of the same coin

The human embryo is extremely sensitive to stress and surrounding …
END_OF_DOCUMENT_TOKEN_TO_BE_REPLACED