Perfect oil for IVF should do nothing but protect the culture. It should not have any negative influence on the gametes, embryos or media by adding unwanted or removing necessary components. However not all oils are or act the same. In this blog post I will guide you through different types of oil and things to consider when choosing oil for your IVF culture.

Oil for protection - a stroke of genius

The use of oil to protect the sensitive gametes and embryos was introduced long before IVF became a routine treatment. One of the first known applications was in a study of the impact of virus on mouse embryos1, back in the 1960´s. It was a stroke of genius as covering a water-based media with inert oil will protect the culture from evaporation and contamination, yet it allows for direct access to the cultured cells through the oil.

What types of oils exist and how do they differ?

Oil is a term that only specifies that the substance is a non-polar and viscous liquid. It may have been produced from animal or plant materials, it can come from crude oil (often named mineral oil) or it can be synthetic. The two main types of synthetic oil are silicon oil and poly alpha olefin (PAO) oil.

Plant or animal derived oils are most of the time composed of triglycerides. This means that three hydrophobic carbohydrate chains are linked as esters to a hydrophilic molecule of glycerol. They are often not completely saturated, i.e. they contain double bonds, making them sensitive to oxidation. The oxidation does in turn make the oil rancid, a process where toxic groups such as peroxides or aldehydes are formed in the oil structure. Natural oils are to my knowledge not used in IVF, but if they are sufficiently refined and fresh, then they should be useful. 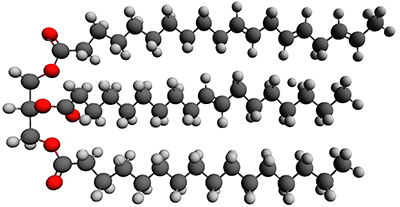 Mineral oils are also originating from plant or animal materials, but the material has degraded over millions of years, altering the composition and structure. The petroleum used to produce commercial mineral oils has picked up several elements over time such as Sulphur and various metals, some of which are toxic (arsenic, cadmium, lead). The dominating molecules are alkanes that can be straight, branched or ring shaped. Currently oils used for IVF are with few exceptions highly purified mineral oils.

Paraffin oil is a type of mineral oil. Mineral and paraffin oils have the same origin, the term Paraffin oil is however often used for oils that are further refined, which increase the purity and make them less reactive to chemical attacks such as e.g. oxidation. 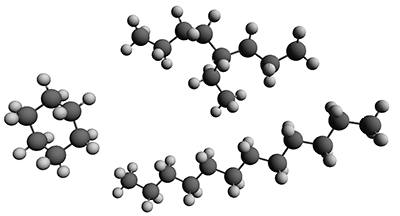 Synthetic oils are made in a chemical plant, using smaller molecules as a starting material. Silicon oil is synthesised by polymerising siloxane with side-chains until the desired oil quality is achieved. Silicone oils are mainly produced for other applications than medicine and may contain short chain residues that are probably toxic. They are well defined, inert and inflammable. Silicone oils have been tested in IVF with varying results. The problem is most likely to find a quality that free from low molecular contaminants and yet not too expensive.

PAO oils are synthesized in a similar way as Silicone oil, but the backbone molecule is a short chain organic molecule called alpha olefin that have been produced in by refining petroleum. The difference as compared to mineral oil is that the start material is well defined. 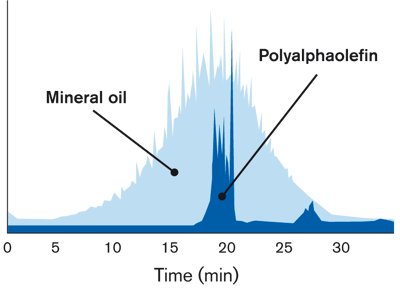 Gas chromatogram of Mineral oil vs PAO oil. The distribution of molecular weight is significantly smaller for Polyalphaolefin oil than for conventional (mineral) oil.

The downside is the higher price and that PAO oils are produced mainly for industrial use where additives are put in the oil such as e.g. anticorrosive agents. Those additives are almost always toxic to cells. 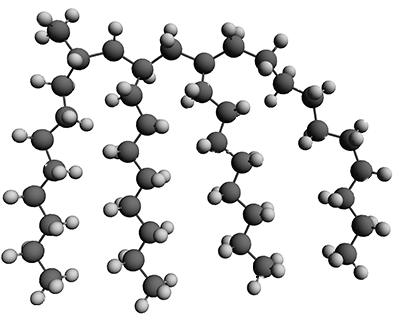 Mineral oil is the type of oil currently used in IVF. There is however a lot of variance between these oils and they vary in quality.

A good mineral oil for IVF consists of similar sized aliphatic molecules. The oil is produced by distillation of petroleum followed by purification steps to remove contaminants such as sulphur, and finally hydrogenation where hydrogen molecules are added to all the double bonds, creating fully saturated oil.

Fully saturated oils are fairly inert and will not react quickly at normal temperatures with e.g. oxygen. They are however still sensitive to oxygenation, especially if they are kept warm or in sunlight. Contrary to common belief, water can be dissolved in oil at a low concentration of about 25 ppm (depending on temperature). Usually the oil that is used in IVF is already saturated with water so that it won’t absorb water from the culture media.

Mixed qualities when establishing the viscosity

It is important to have oil with a viscosity that makes it easy to handle in the laboratory. There are two ways to get the correct viscosity of the final product. Either it can be produced with the correct length and shape of the hydrocarbon chains from the beginning so that the oil gets the intended viscosity.

Another common method is to produce oil that is too viscous and then dilute it with oil of lower viscosity. This works well for most uses, but when the second method is used for IVF the added short-chain hydrocarbons have a larger potential to harm the embryos as they are more volatile and easier enter the media droplet where the embryos are cultured.

Potential pitfalls during cleaning and transportation

Most oils are clean immediately after the refining. Once this is complete the oil is pumped into a local storage tank and later on transferred to a tanker truck for transport to the point of filling into drums. The oil may also be filtered in order to remove waxes that might otherwise make the oil look hazy. Unfortunately the trucks, pipes and filters are often used for many different products meaning that they have to be cleaned and rinsed between production runs.

Even if the paraffin oil for IVF is fully saturated, it is still at risk of been oxidized during storage. As mentioned in the beginning, this process is accelerated when the oil is stored at an elevated temperature and exposed to light. The oxidation that may take place is, for me as a chemist, very interesting. The first step involves the formation of peroxide. Peroxides are very reactive and will do a lot of damage to any cells that they come in contact with. 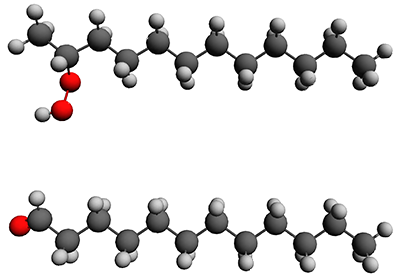 Food grade oils are considered good until the peroxides level as high as 10 – 12 meq/kg but the peroxide concentrations needed to have a negative influence on embryos is just above 0.02 meq/kg. Such low levels are hard even to measure unless special equipment is used. When the oxidation continues, the peroxides turn into aldehydes or ketones, molecules that also have a large potential for biological activity.

The last two steps, oxidation to carboxylic acid and carbon dioxide are actually making the oil better again for the embryos.

To be sure you have a proper oil make sure it has been released using strict embryo development criteria and relevant QC-tests.

How thick layer of mineral oil is needed to cover the culture?

In a simple experiment, water was placed in 14 mL tubes and then covered with 0, 1, 2 … 7 mm of oil. The rate of evaporation was determined by weighing after the tubes had been incubated at 37°C. Even the thinnest (1 mm) layer of oil, reduces the evaporation but it takes a 2 mm layer to fully protect the water from evaporating. Once the layer is 3 mm thick, an additional thickness will not further reduce the rate of evaporation. 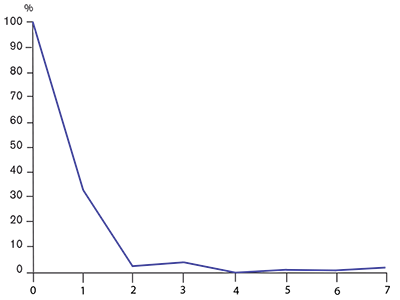 In a second set of experiments the test was performed at 60 °C in order to accelerate the evaporation and to determine more precisely the necessary thickness of the oil layer. This experiments pinpoints that a layer that is at least 1.5 mm will be sufficient. 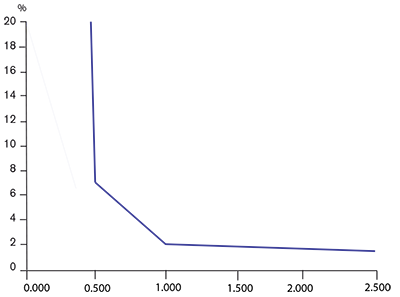 Japanese researcher Otsuki and colleagues experienced reduction in fertilisation rate and impaired embryo development when they began to use a new bottle of oil at their IVF clinic. They decided to make an investigation of the root cause and found it to be high peroxide levels in the oil.

Download a summary of their findings to learn more about why high peroxide levels in oil can harm the culture system and the results from peroxide values in oil from different manufacturers.

This article has been updated and was originally published in March 31, 2016.

Göran is a part of Vitrolife´s research team. With his solid background in Chemistry and special ability to straighten out the most crooked question marks he certainly lives up to the title on his business card – Senior Specialist.

Antioxidants, long touted in cosmeceuticals for their anti-aging …
END_OF_DOCUMENT_TOKEN_TO_BE_REPLACED

This is an abbreviation of Jason Swain (2019) publication with …
END_OF_DOCUMENT_TOKEN_TO_BE_REPLACED