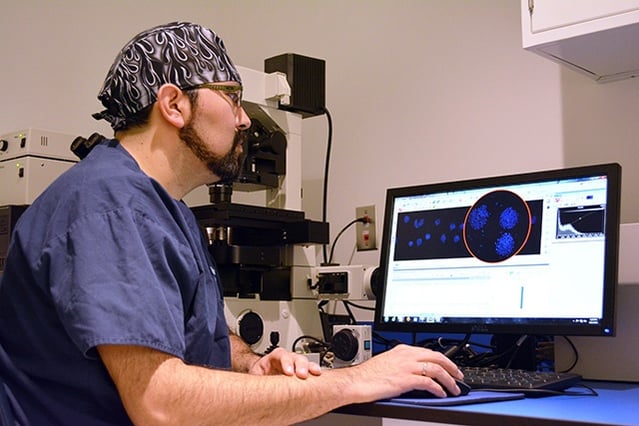 Successful outcomes in IVF require optimal environmental conditions for gametes and embryos throughout the entire cycle. This can be accomplished by ensuring optimal pH and temperature in the incubators, and that the air in the operating theater and the laboratory is clean and free of VOC’s (volatile organic compounds). An additional step is to ensure that media and contact materials used, support embryo development by being embryo safe and free from toxicity. In this blog post I will guide you through the basics for how to prevent toxicity from entering your culture system.

How can toxicity affect the culture system?

The negative effect of suboptimal or toxic media or contact materials on the human embryo has been referred to as reprotoxicity, a subject that been highlighted in many peer reviewed journal articles over the years1-9. Clearly there is concern about toxicity with in the IVF community, the question is what is being done to detect and control those components that are negatively affecting gametes and embryos during IVF. Do we really understand how these materials are or should be tested to ensure a safe and non-toxic culture environment?

We often assume that toxicity kills gametes or embryos, which sometimes can be correct. However, toxicity often has a more subtle effect and can manifest simply as lower than expected rates of fertilisation or impaired embryo development. In some incidences toxicity can lead to reduced or abnormal implantation rates showing that toxicity can impact the embryos viability or potential to become a pregnancy.

It is important to remember that stress is cumulative. In IVF embryos can be effected by the sum of all stress factors during the culture procedure. This means that a toxic component can have a cumulative effect when combined with other stressors. These stressors can amplify the overall effect of even low levels of toxicity. When embryos are exposed to a toxic component in a culture system with other stressors like ovarian stimulations, inappropriate culture conditions or other toxic devices, there is additive effect thereby amplify impacting on an embryos’ viability, which alone could have been relatively benign.

The point is that toxicity may not have an effect solely on the morphology of an embryo.  When combined with other contributing factors low levels of toxicity can have a more profound effect on the viability of human embryos and can directly contribute the reduction of clinical outcomes. Often by the time toxicity is detected it has already had an effect and often impacting clinical success rates.

How should we handle the risk for toxicity?

Martine Nijs and co-workers published a comprehensive study where they investigated the toxicity of various disposable devices used for IVF, including embryo transfer catheters, oocyte pick up needles, surgical and nitrile gloves9. In total, 36 different types of products (72 different brands) were tested with a human sperm survival assay and 40% of these were shown to be toxic. Furthermore, LOT-to-LOT differences were detected with in the same products and it was seen that toxicity could be transferred from one devise to another. Dr. Nijs presented her findings at a Vitrolife symposium at ESHRE 2011.

Gardner et al. suggests that all medical devices coming into contact with gametes and embryos should be properly quality tested to reduce variation in embryo development and subsequent clinical outcome10. The risk of toxicity is real; therefore it is our, manufacturers and end-users, common responsibility to minimise the risks for potential toxicity to entering the culture system. This can only be achieved by using products and equipment that are tested with accurate and sensitive test methods that can detect relatively low levels of toxicants.

Mouse embryo assay (MEA) is a functional and toxicological bioassay used to investigate the safety and efficacy of culture media and disposables used in assisted reproduction. It has been argued that MEA is not a sensitive bioassay and perhaps is not analogous enough to the human culture system. Attempts have been made to create alternative test methods (stem cell and other human cell assays) although none are as sensitive enough to detect toxicity that can affect embryos. In fact, MEA can be designed to be extremely sensitive and more capable than other bioassays and analytic tests when embryo safety is the objective.

There are no standard guidelines for MEA

Manufactures utilise the MEA for the release of products, as part of the QC/QA process, but with little guidance from regulatory authorities. In the United States, FDA mandates that MEA should be performed on media and other devices but doesn’t suggest any guidelines regarding the testing procedure or methods. To achieve a CE Mark in the EU, there is no requirement for MEA, only that the purity of the components be such that they don’t contribute to toxicity.

It has been left to the manufacturers to determine level of control and how the MEA is performed. Unfortunately there is no standardisation within the industry on how to this should be done, therefore you could potentially be purchasing devices that have been tested with inferior assays not capable of detecting all toxicity, if they are tested at all.

It has been established, although not clearly documented, that an appropriate end point for the MEA is blastocyst development 96 hrs. Unfortunately, this specification only considers the subjective morphology of embryos to determine if toxicity is present. There is evidence that not all blastocysts have the same implantation potential, therefore making this specification questionable as a sensitive endpoint to detect the presence of toxicity. Vitrolife has determined that blastocyst development at 96 hrs alone is not adequate to identify all sources of toxicity and qualitative end points are necessary when determining the safety of medical devices for the ART community.

Arguably, mouse embryo bioassays can be insensitive and can often be influenced by the set up and environmental factors in the system. It is crucial that a mouse bioassay be established in a controlled and repeatable system. It is also important to understand that in controlling the environment one can influence the sensitivity of the assay. The sensitivity of the bioassay can be manipulated to produce any desired results, but by controlling key factors the assay can be made to be more robust and detect very low levels of toxicity that can add to the cumulative effect on the quality of embryos.

The F1 hybrid is the most common mouse strain used in MEA since it is a stable genetic model. While reliable, the F1 alone may not be able to detect toxicity as well as other strains11.  When the MEA is established in a robust system where assay conditions are controlled to increase the sensitive, the F-1 mouse stain can be implemented to detect toxicity, but it’s important to understand how it has been set up and what the objectives are for that assay. Utilising other mouse strains increases the sensitivity, which is why we use outbred strains to investigate specific raw materials and constituents that are known to effect the development of embryos.

By using multiple end-points, and not just a single subjective endpoint, the sensitivity of the assay is increased. For example, toxicity has been shown to cause a delay in embryo development at 80hrs, but with normal morphology reported at 96hr, making the toxicity undetectable using the recognised assay end point of morphology at 96 hrs.

Assessing the viability of embryos in the assay increases the sensitivity of the test. This indicates that morphology alone as an end-point does not give indications regarding the quality of embryos and may not be effective in detecting all toxicity.

Embryo morphology is an effective endpoint when assessing the potential of an embryo.  It has been thought that not all blastocysts have the same implantation potential; this should also be considered when performing MEA. By assessing the number of cells in each embryo we can start to make a quantitative assessment which is correlated to the viability. Lane and Gardner12 found a correlation between the mean total cell count and fetal development (Figure 1). Interestingly they also found no correlation between blastocyst formation (development) and fetal development. This data indicates that the number of cells in a blastocyst is more indicative of the developmental potential than embryo morphology. 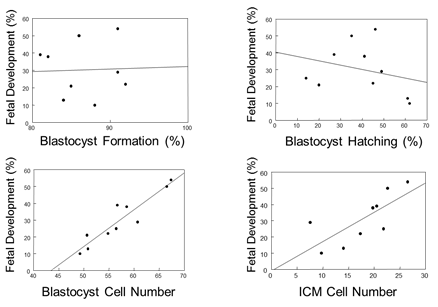 Embryos exposed to a toxic component can be developmentally delayed, depending on when the exposure occurs and the level of toxicity it possesses. This delay can slow down normal cell division and therefore delay morphology. Interestingly, blastocysts have the ability to recover and become morphologically normal. Despite this morphological recovery, the rate of cell division is not altered. Therefore, by quantifying the number of cells in embryos exposed to toxins, we can still detect the developmental delay in a reduction in the number of cells making up the blastocysts.

When embryos are stained to determine the total cell counts (Figure 2) it can become clearer that two morphologically normal embryos are in fact not equal.

Figure 2. The embryos (1a, 2b) are clearly morphologically expanded blastocysts, with the embryo on the right (2a) herniating from the zona pellucida.

The embryo 1a has a total cell count of 149 cells (1b) while the embryo that is herniating (2a) has only 74 cells (2b). Clearly if there embryos represented the cohort of embryos form a test of a toxic compound a cohort with normal morphology but clearly effected normal cell count may be considered safe and pass MEA if cell counting is not implemented.

Vitrolife utilises an in-house laboratory to provide MEA analysis for all raw material, critical manufacturing materials and finished products. The MEA testing is organised independently form the manufacturing unit; with embryology expertise and support concentrated in this functional area. The MEA laboratory team works closely with QC and QA functions to ensure compliance with international certification and regulations and operates according to GLP and GMP guidelines.

Additionally the MEA is used by the R&D groups, for pre-clinical verification of new products before clinical data is collected. When testing new constituents and sensitive raw materials, we routinely use of outbred strain MEA, due to the increased sensitivity to suboptimal compounds in additional to F1 strains used for more routine analysis.

In this movie, I will guide you through the steps of the Vitrolife MEA.

Brett is a key player in securing the highly appreciated Vitrolife quality. As the MEA Lab Manager he is responsible for making sure that only the best gets through our sensitive mouse embryo assay.

Antioxidants, long touted in cosmeceuticals for their anti-aging …
END_OF_DOCUMENT_TOKEN_TO_BE_REPLACED

This is an abbreviation of Jason Swain (2019) publication with …
END_OF_DOCUMENT_TOKEN_TO_BE_REPLACED