In the IVF lab we basically do the same things every day. Often performed on a very tight schedule and not all that interesting but still must be done with care, as everything which concerns patients. Preparation of dishes is one of those very important things that at least I find time consuming and slightly boring. Dish preparation is commonly done several times a day: perhaps in the morning for ICSI, during mid-day for sperm insemination of oocytes and most common, in the late afternoon as part of the preparations for next day. How do we prepare dishes? And how should we do it?

The routine back in the days - what little we knew

When I was working in the IVF lab before joining Vitrolife we had lots of dishes to prepare each day as the last task before going home. We used to culture embryos in 50µL droplets under oil. This was during the 1990s, if that´s an excuse...  We brought the bottles out of the fridge about an hour in advance to warm them up a bit. It was thought that condensation under the dish lids was a negative thing and increased the risk of infections (!). We then placed a number of petri dishes in a row inside the laminar air flow hood run on half speed.

After patient ID-marking we removed the lids and placed the droplets in the dishes. When there were many dishes to prepare we added drops to perhaps five dishes and then covered with oil. But, now and then, when we were tired and time was running late, we put drops in many more dishes before we covered them with oil. In those early days we did not think much of evaporation and the risk of osmolality increase. We should have.

Fortunately there are people who do think about these things and perform studies that they publish for the benefits of the rest of us (eg. people like me). One such researcher is Jason Swain who together with his group measured osmolality in dishes prepared under different conditions1.

Drops were prepared either at 23⁰ or on a heated stage at 37⁰C, with the laminar air flow hood on or off. The prepared drops were of different volumes, 10, 20 and 40 microliters. 15 drops were placed in each dish and two dishes were prepared during 90 seconds before overlaying with oil. Drops were either prepared by  pipetting the drops directly onto the dish and covered with oil (standard method) or pipetted onto the dish, covered with oil before removing the underlying medium and replaced with fresh medium (wash-drop method). Osmolality was measured 5 minutes and 24 hours after dish preparation. 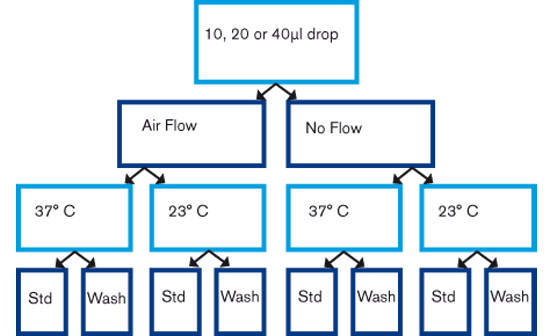 Keep air flow on during dish preparation for maintained sterility

It may be a concern that the air flow in the laminar air flow hood will increase evaporation and subsequently increased osmolality. The measurements by Swain et al. showed that this concern is unjustified; osmolality was not significantly increased when the dishes were prepared under air flow, and hence it is advised to keep the air flow on during dish preparations to maintain sterility.

As expected though there was a significant increase in osmolality when drops were made at 37⁰C and the increase was highest in the smallest drops. Also, the standard method of preparing dishes caused a problem compared to the wash-droplet method which did not result in increased osmolality. There was no difference in results if measurements were performed 5 min or 24 hours after dish preparation. 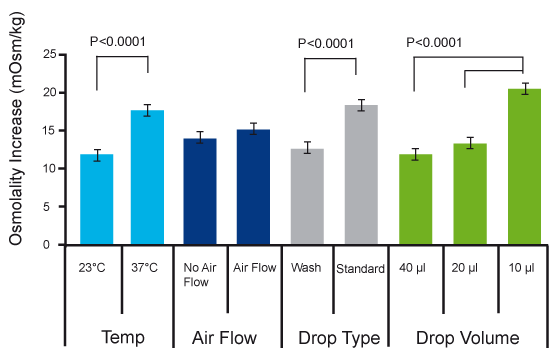 The study showed that conditions used during microdrop preparations impacted media osmolality. Data sampling was done after 5 minutes. Lower drop volume, higher temperature and standard method all significantly increased osmolality. There were no differences after 24 hours.

It has been known for decades2 that mammalian embryos develop over an osmolality range of ~255-295 mOsm/kg. As can be seen in Fig 3 combining the worst things we can do, use small droplet size, high temperature conditions and standard droplet preparation method will increase osmolality way above the level that embryos can tolerate for development and survival. 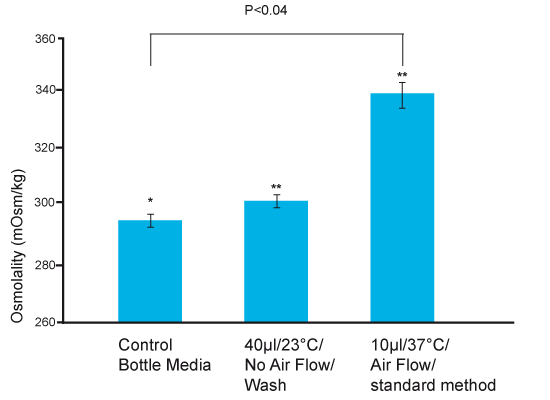 Fig 3. Osmolality after combination of best and worst case scenarios.

Osmolality has a great impact on embryo development

To demonstrate impact of osmolality on embryo development, mouse embryos were cultured in media with different osmolality levels: 270, 290, 310 and 330 mOsm/kg. As can be seen in Fig 4 already at the cleavage stage development is affected at 330mOsm/kg and it gets worse day by day.

After 96 hours there are almost no expanded or hatching blastocysts at all at the higher osmolality levels. In fact, mammalian embryos will only develop well at 270-290 mOsm/kg. Which of course is the reason why commercial media have the osmolality level commonly set within this range. 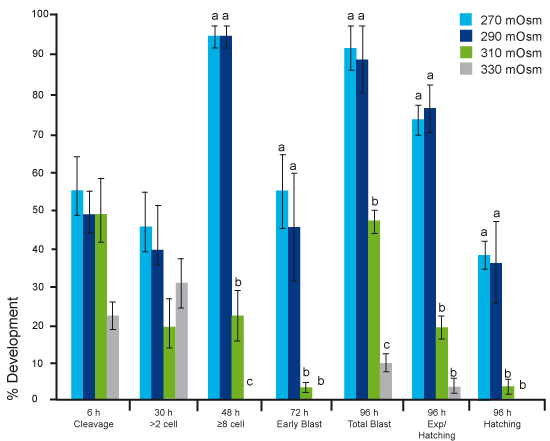 The optimal way of dish preparation

Understanding how much osmolality increases when we use small droplets such as for ICSI and the impact this has on embryo development we should probably prepare dishes one by one. Placing the droplets in the dish and immediately cover with oil before placing droplets in the second dish and so on is doable. Yes, this is time consuming, agree, and it would be easiest and fastest if two embryologists could work together with this task, one to make the droplets and the other one to cover with oil.

To keep bottles cold at all times is very important considering the fact the higher the temperature of the medium, the higher is the risk of evaporation when the bottle is opened.

Now, you may think that “everyone know this, why this blog at all?” But, it is a fact that we still get questions and complaints from users of Vitrolife media regarding shrinkage of oocytes and embryos.

Shrinkage means too high osmolality but of course all media manufacturers measure osmolality before release of media lots to customers. To include a written instruction for dish preparations should be part of all laboratories quality control system. This would facilitate trouble shooting when and if results occasionally drop below “normal”.

Another important parameter for optimal culture conditions is the use of plastic labware. My colleague Göran Mellbin has written a white paper where he goes through different types of plastics and what to think about when using them during IVF.

2. Brinster RL. Studies on the development of mouse embryos in vitro. The effect of osmolarity and hydrogen ion concentration. J Exp. Zool (1965) 158, 49-57.

Ann-Helene has a PhD in Genetics and started her career in IVF as Lab Manager at the private clinic Fertilitetscentrum in Sweden. Ann-Helene is a popular lecturer at Vitrolife workshops where she makes complicated matters easy to understand.

Antioxidants, long touted in cosmeceuticals for their anti-aging …
END_OF_DOCUMENT_TOKEN_TO_BE_REPLACED

This is an abbreviation of Jason Swain (2019) publication with …
END_OF_DOCUMENT_TOKEN_TO_BE_REPLACED