What has lactate (aka lactic acid) got to do with embryos? Most people are familiar with this carboxylic acid only in the context of it as the end product of glucose use through glycolysis that builds up in your muscles when you exercise at the gym! Well, it transpires that lactate is actually a key regulator of embryo function, with new roles emerging as our understanding of cell physiology increases. In other words, it is far more important than we originally thought.

In vivo, the ovulated egg is surrounded by a cloud of lactate. This lactate is created by the cumulus cells which readily metabolise glucose within the oviduct and produce both pyruvate and lactate (but with lactate being produced at a much higher level than pyruvate)1. Furthermore, the levels of lactate in the human oviduct are around twice that found in the uterus. Consequently, from fertilisation to implantation the preimplantation embryo is exposed to an ever-decreasing concentration of lactate (10mM during the cleavage stages in the oviduct down to 5mM for the blastocyst in the uterus). So, the obvious question is, “Is this lactate gradient of physiological relevance?”. To answer this question, we must first consider the physiology and metabolism of the oocyte and embryo (be forewarned, the following section contains some biochemistry).

Oocytes and embryos are fussy eaters

The oocyte and cleavage stage embryo have limited energy (ATP) requirements due to their low numbers of cell divisions and hence limited biosynthesis. Consequently, this creates high levels of ATP in the oocyte and blastomeres. Now the following may seem counter intuitive at first, but cells with a low ATP content are actually those which are energetically very active and as a result are quickly using the ATP they produce. As ATP cannot be stored, a cell with a high ATP level is by default one that is not active. Hence the oocyte and cleavage stages are characterised by a higher ATP level than the post-compacted embryo, which due to their high metabolic requirements for increased cell divisions, biosynthesis, and the formation of the blastocoel2 have a significantly lower level of ATP3. As a direct result of the high ATP present in the oocyte and cleavage stages, glucose metabolism is inhibited due to the allosteric regulation of the rate limiting glycolytic enzyme phosphofructokinase (PFK)4. Hence, glucose is not able to support the denuded oocyte or early cleavage stages as it simply cannot be metabolised, and explains the need for pyruvate and lactate5. Concomitant with the activation of the embryonic genome, and an increase in energy demand associated with higher levels of biosynthesis etc., ATP levels fall and the inhibition of PFK lifted, resulting in a high uptake and use of glucose post-compaction. An extremely interesting twist to the story of embryo metabolism is the fate of this glucose (more on this later).

So, from fertilisation and through the cleavage divisions, pyruvate is the metabolite that is oxidised at low amounts to create the ATP to support development. So, what is the relationship between pyruvate and lactate? The two carboxylic acids are in equilibrium, with the enzyme lactate dehydrogenase (LDH) interconverting the two acids, as shown in Figure 1.

A very important fact about LDH, is that not only is it in equilibrium (i.e. lactate and pyruvate are readily interchanged), but that the Gibb’s free energy of this reaction is close to zero, which when translated into non-science speak means that the only thing affecting whether lactate forms pyruvate, or whether pyruvate forms lactate, is the relative concentration of the two acids. So, if lactate concentration is high, then pyruvate will be formed, whereas if lactate is decreased, then less pyruvate is formed. In reality it is a little more complicated than this, but it is useful to get the point across. Hence for the early embryo, a high lactate environment will ensure that pyruvate is formed. Things, however, get completely inverted by at the blastocyst stage, where glucose is the preferred nutrient of the embryo. In line with this, it was demonstrated in the mouse that embryos cultured in a high lactate medium and transferred on day 3 had a higher viability than those embryos cultured in low lactate environment, but that post compaction there was a switch and high viability was associated exposure to low lactate6. Also, Figure 2 shows that culturing mouse embryos in a lower lactate concentration decreases blastocyst development. 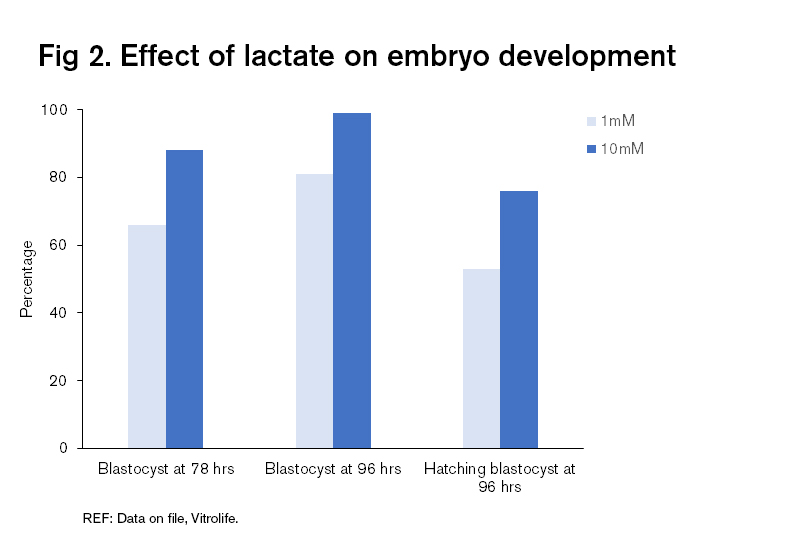 Unlike most somatic cells, the glucose taken up by the blastocyst is not entirely oxidised (although this is not for a lack of competent mitochondria to do so). Instead, around half of the glucose consumed is converted to lactate. Curious! Originally when this was first reported it was determined that this rather unusual pattern of metabolism was also observed in cancer cells7,8, and is referred to as aerobic glycolysis (not to be confused with anaerobic glycolysis associated with the gym). It was originally deemed that a high glucose use was required to support biosynthesis beyond a cell’s energy requirements9. However, it was subsequently proposed that rather than being a simple waste product of glucose usage, lactate itself is a key signalling molecule and is involved in three major aspects of implantation, namely invasion, angiogenesis and immune modulation10. In other words, blastocysts produce significant quantities of lactate into their surroundings to specifically create a microenvironment characterised by high lactate, and consequently low pH, which are used to facilitate implantation.

It is clear that a gradient from high to low lactate concentration from fertilisation to the blastocyst does indeed make physiological sense. The high lactate environment (~10mM) earlier on ensures that the cleavage stage embryo can utilise pyruvate, while a reduced lactate at the blastocyst stage (~5mM) ensures that blastocyst-derived lactate will be released into the environment to facilitate implantation. So next time you get that “lactic acid burn” at the gym, I hope that you will have a new appreciation for the role it has to play during the first week of life!

Do you want to read more about embryo culture? Find several scientific summaries among our educational material here.

David has provided the IVF community with ground breaking research on embryo physiology, cryopreservation and culture conditions for over 30 years. When not lecturing around the world, he can be found at the University of Melbourne.

Antioxidants, long touted in cosmeceuticals for their anti-aging …
END_OF_DOCUMENT_TOKEN_TO_BE_REPLACED

This is an abbreviation of Jason Swain (2019) publication with …
END_OF_DOCUMENT_TOKEN_TO_BE_REPLACED