Oxygen, the very gas that we depend on for life, is largely responsible for our ageing, demise and ultimately our death. Professor David K Gardner considers this paradox in his blog post.

The poison is in the dose: Reactive Oxygen Species can be helpful AND yet highly detrimental

Although oxygen is used in the creation of ATP (the currency of energy in our cells), during this process Reactive Oxygen Species (ROS) are also created. Herein lies the problem; while low levels of specific ROS are involved in cell signalling pathways, at higher concentrations ROS (also refered to as oxidative stress) become toxic to cells quickly, and have a well-documented negative effect on sperm, eggs and embryos.

When ROS build up they are highly destructive and damage our DNA, our cell membranes and the organelles within our cells – especially our mitochondria, which are the “Power Plants” of our cells.

Fortunately for you and I, our bodies possess a rather sophisticated system for dealing with excess ROS in the form of antioxidants (either produced by the body itself or obtained directly in our diet), which in essence help to neutralise the damaging effects of ROS.

Antioxidants come in many forms, and we need to ensure we consume sufficient amounts of antioxidants such as vitamin C (ascorbic acid), A (retinol) and E (α-tocopherol), in order to maintain a healthy body. Indeed, data is emerging that a diet high in antioxidants confers some protection against neurological conditions, such as Alzheimer’s and Parkinson’s disease, which typically are associated with some form of mitochondrial pathologies, possibly due to increased oxidative stress.

So to ensure your future cognitive function, the message instilled is to remember to consume plenty of carrots (beta-carotene), green vegetables such as spinach (vitamin E), a variety of fruits and berries (vitamin C, E…), as well as dairy products and liver (vitamin C). In other words, eat a well-balanced diet! 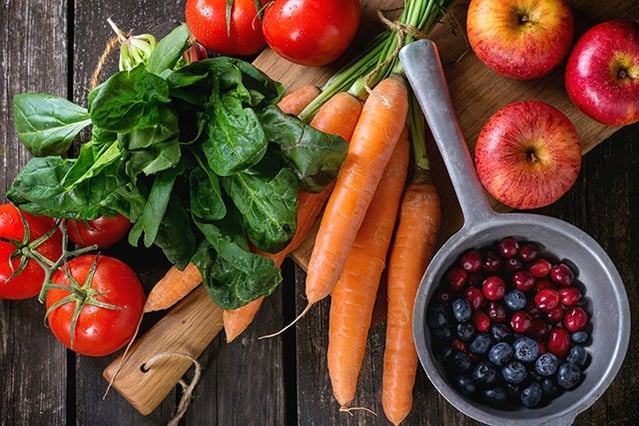 The importance of antioxidants for gametes and embryos

So if antioxidants are so important for our body’s overall health, are they similarly required for gametes and embryos, and do they promote development? Fluid in the mammalian female reproductive tract does provide an array of antioxidants in order to protect gametes and embryos from oxidative stress, and hence this would indicate a need for their presence.

However, it is not common to find antioxidants in human embryo culture media used for IVF. The one exception to this is the alpha-keto acid pyruvate, an essential nutrient for the cleavage stage embryo, which also possesses antioxidant properties.

Vitamins C, A and E are not typically present in embryo culture media, for two practical reasons; firstly, vitamin C is highly labile in solution and although we have shown it to work effectively as an antioxidant in embryo culture media, its efficacy is lost within a few hours, and secondly vitamins A and E are lipid soluble and are therefore difficult to keep in solution.

Consequently, we examined another group of physiological antioxidants, namely α-lipoic acid, acetyl-cysteine and acetyl-carnitine, and determined their collective benefit on gametes and embryos in culture and the effects on fetal development 1.

Typically, an antioxidant acts by reducing the relevant ROS (e.g. hydrogen peroxide) by giving up an electron, thereby preventing it from doing any further oxidative damage. However, once the antioxidant has donated an electron, it has become oxidised itself and can no longer function to protect against the actions of further ROS. Consequently, it needs to be reduced by another antioxidant. Hence, antioxidants within the cells of our body do not tend to exist in isolation, but rather work together in networks, whereby one antioxidant can reduce another oxidised antioxidant to facilitate its renewed action (a bit like recharging a battery).

The key antioxidant in our cells, which readily performs this function, is α-lipoic acid. Due to its chemistry, it is available to readily reduce oxidised antioxidants, thereby earning the nickname “the antioxidant of all antioxidants”.

Ensuring there is sufficient α-lipoic acid present means that other antioxidants will continue to be available in their reduced forms to protect the cell against further oxidative stress. Another important antioxidant in the cell’s defence system is reduced glutathione (GSH). Glutathione is one of the cell’s main non-enzymatic oxidant defence mechanisms; it can readily detoxify peroxides and hence maintaining glutathione in its reduced form is key to a healthy cell. Glutathione is formed by cells through the metabolism of cysteine, and supplying cysteine to oocytes and embryos has been shown to increase intracellular levels of reduced glutathione.

A third important antioxidant is carnitine. Carnitine is perhaps best known for its role in fatty acid metabolism, but it also possesses the ability to protect against oxidative stress, particularly by inhibiting lipid peroxidation.

Consequently the provision of α-lipoic acid, acetyl-cysteine and acetyl-carnitine in combination was conceptualised to facilitate the creation of a robust antioxidant strategy within cells in the culture dish.

Antioxidants work better as a team

Given that it remains common to use atmospheric (20%) oxygen for some or all of human embryo culture (which causes high levels of oxidative stress), the inclusion of physiological antioxidants would likely be of benefit to the preimplantation embryo in culture. In our initial mouse studies, it was evident that when present individually, the three antioxidants α-lipoic acid, acetyl cysteine and acetyl-carnitine all improved embryo development.

"However, what was most noticeable was the synergistic effects when the three antioxidants were present together, not only reducing cleavage times, but resulting in blastocysts of higher cell numbers and significantly improved outcome after transfer".

One of the mechanisms behind this was that together these antioxidants prevented the characteristic decline in GSH within embryos typically observed in culture. Beneficial effects of these antioxidants were detected at both reduced (5%) and atmospheric oxygen, although the effects were much greater when embryos were exposed to atmospheric oxygen, which is consistent with a greater oxidative stress being induced at 20% oxygen. Subsequent studies went on to determine a beneficial effect of these three antioxidants on gametes during IVF and embryo handling, leading to significantly improved outcomes.

These proof-of-principle studies have demonstrated the significance of including an appropriate antioxidant combination in an embryo culture system, and enable the creation of a stress-free environment to facilitate the development of healthier embryos. Together with Vitrolife, we are currently evaluating the clinical efficacy of this antioxidant strategy in clinical trials worldwide.

David has provided the IVF community with ground breaking research on embryo physiology, cryopreservation and culture conditions for over 30 years. When not lecturing around the world, he can be found at the University of Melbourne.

Perfect oil for IVF should do nothing but protect the culture. It …
END_OF_DOCUMENT_TOKEN_TO_BE_REPLACED

Lactate and Embryos – a new perspective

What has lactate (aka lactic acid) got to do with embryos? Most …
END_OF_DOCUMENT_TOKEN_TO_BE_REPLACED