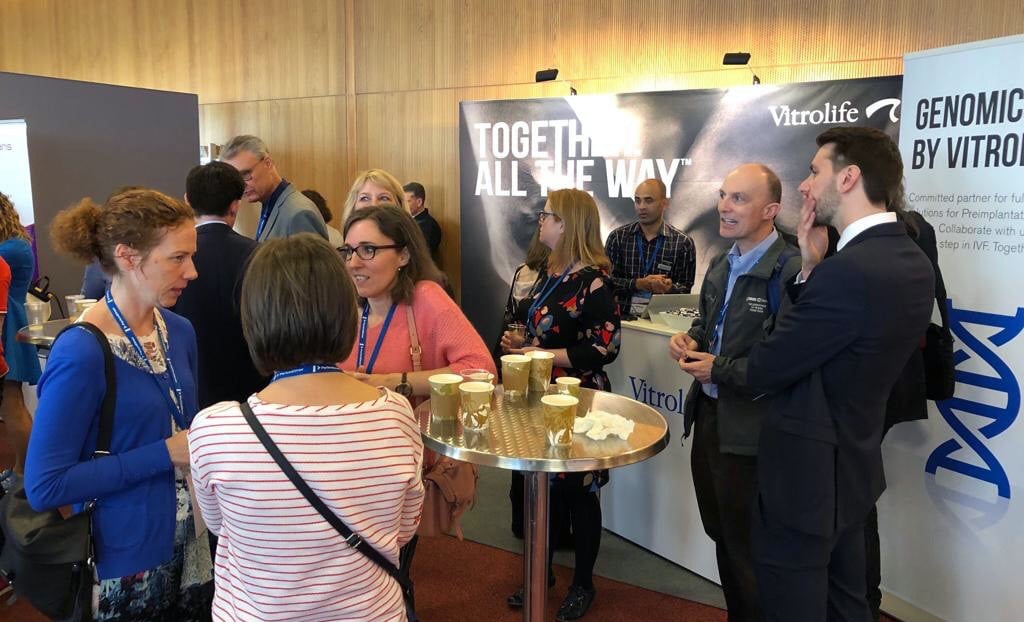 Genetic needle in a haystack

At our annual meetings, we always try to balance a focus on preimplantation genetics and diagnostic testing with basic science. This year we had an exceptional series of speakers all world-class in their respective fields. The local organiser, respected human geneticist Prof Stylianos Antonarakis, University of Geneva, and veteran of the human genome sequencing project, opened the meeting with an authoritative overview of where we are currently with whole genome/exome sequencing for identifying monogenic disease. It is remarkable that of the 3 billion base pairs in the human genome, only an estimated 0.3% code for proteins and that current estimates suggest that there are only around 20,000 genes. And yet, even today we have only identified 4,300 monogenic diseases out of an estimated 9,000. Anyone contemplating sequencing the whole genome of embryos therefore faces the gargantuan task of distinguishing between tens of thousands of benign variants and the handful of pathogenic recessive mutations that we all carry. Another interesting statistic was that the incidence of sperm cells with dominant mutations doubles every 16 years! A good reason to limit the age of sperm donors.

For me, Nicolas Platcha’s (A* Institute, Singapore) talk on real time imaging of mouse preimplantation embryos was a particular highlight as he is able to image the processes of cleavage, compaction and blastulation at a cellular and molecular level in real time and show, for example, how cells destined to form the trophectoderm actively engulf inner cell mass cells using filopodia to extend over the cell surface. I started my scientific career in the mid 1970s (45 years ago!) trying to understand the origin of these two primary lineages (the title of my PhD thesis) and how they form a blastocyst in Martin Johnson’s lab in Cambridge. Martin was Bob Edwards’ first PhD student and I vividly remember us all celebrating the birth of Louise Brown with Bob and Jean Purdy in 1978.

From PGT-A to genome editing?

Helen O’Neill, University College London, gave a thought-provoking overview of genome editing and how improved efficiency and accuracy make it possible to contemplate editing human embryos as an alternative to PGT with all the potential societal and ethical issues that arise. She also vividly described the media circus surrounding the claims of a Chinese scientist last year, now under self-imposed house arrest, that he had done this successfully and there had been two births of children edited to make them resistant to HIV. This was followed by an ‘agora’ or ‘town hall’ meeting chaired by Prof Antanorakis in which the audience was invited to make comments. The audience of PGT-M practitioners was not convinced that any possibility of off target editing was worth the risk, but it is clear that this is powerful technology for studying early human development.

Clinical highlights included extensive presentations and discussion on the topic of chromosome mosaicism. This is the situation where it appears that not all the cells in the trophectoderm biopsy are aneuploid and NGS-based testing detects an intermediate copy number change. It is now clear that transfer of mosaic embryos can result in live births of apparently karyotypically healthy babies but with a lower success rate per embryo transferred and one presentation summarised over 500 mosaic transfers (M. Viotti, Zouves Fertility Centre, Foster City, California). PGDIS has provided guidelines for considering mosaic embryos for transfer and is in the process of updating them.

A high incidence of chromosome aneuploidy (abnormal chromosome number) in human gametes and embryos is one of the principal causes of implantation failure and pregnancy loss following in vitro fertilisation (IVF). In fact, the average aneuploidy rate per embryo of women of reproductive age is estimated to be about 50% whereas the incidence of aneuploidy at birth is only about 0.3%. Both time lapse-monitoring (TLM) and PGT-A improve clinical pregnancy rates when used for embryo selection. The question is how they can be used together to enhance embryo selection further.

Semra Kahraman’s group from the Memorial Hospital in Istanbul compared the timing of first cleavage and blastulation between euploid (normal chromosome number) and different types of aneuploid embryos following trophectoderm biopsy at the blastocyst stage, in over 1500 embryos. They showed a small but significant delay in both these parameters in all classes of aneuploid embryos except those with only mosaic copy number changes (only occurring in some but not all of the samples cells). The variation between embryos was high, however, and could not be used to identify aneuploid embryos accurately by itself. On the other hand, it might be possible to prioritise which embryos to test by PGT-A and reduce costs for the patient.

PGDIS has been bringing together the clinical and scientific community interested in preimplantation genetics for nearly 30 years now. As a diagnostic alternative for patients at risk of monogenic diseases, PGT-M against all the odds remains important and is now well established clinically but methods and applications continue to expand. For example, it looks increasingly possible that non-invasive methods for analysing embryo DNA in the blastocoel fluid or culture medium may soon be possible (Luca Gianaroli, Bologna, Italy and Carmen Rubio, Valencia, Spain, respectively) and advances in technology, particularly NGS, for comprehensive analysis of the transcriptome and genome (Thierry Voet, Sanger Centre and University of Leuven) and the methylome (Gavin Kelsey, Babraham, Cambridge), at the single cell level, continue to push the boundaries and challenge us. So plenty to look forward to next year in Shanghai – come and join us!

Prof. Handyside did his first degree and PhD studies at the University of Cambridge and has joined Vitrolife as Scientific Advisor. Prof. Handyside developed the first transgenic mouse knockout of the HPRT gene using embryonic stem cells as a model of the human X-linked inherited disease, Lesch-Nyhan Syndrome. Afterwards he joined Prof. Lord Robert Winston at Hammersmith Hospital, London and in 1990 achieved the first pregnancies worldwide following IVF and preimplantation genetic testing (PGT) of inherited disease. Previously Prof. Handyside has been director and consultant in preimplantation genetics at the Bridge Clinc, London for twenty years and Principal Scientist at Illumina.

Vitrolife Genomics: A busy year and exciting developments in PGT-A