Hyaluronic acid, also called hyaluronan, is a glycosaminoglycan distributed widely throughout our body. It is particularly abundant in the female reproductive tract, both in the oviduct and the uterus, which makes hyaluronan an important molecule for applications in assisted reproduction. In this blog I will focus on the role of hyaluronan in the process of embryo implantation. 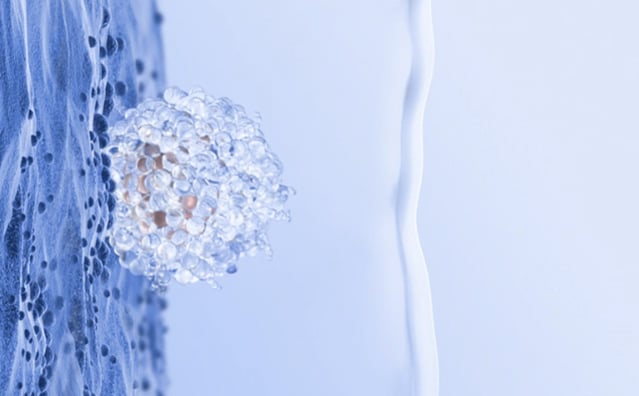 Hyaluronan is a naturally occurring molecule in the body

Hyaluronan is the major glycosaminoglycan present in almost all tissues of the body where it builds up the extracellular matrix. It is also found in follicular, oviductal and uterine fluids. Hyaluronan has a lot of different functions, including contributing to tissue hydrodynamics, movement and proliferation of cells, and participates in a number of cell surface receptor interactions. It is unique among the bodies glycosaminoglycans in that it is formed in the plasma membrane instead of the Golgi apparatus and that it is present as very large molecules.

In the female reproductive tract, hyaluronan is known to provide high viscosity environments in the oviduct and uterus. Interestingly, the synthesis of hyaluronan in the uterus increases dramatically before implantation and it decreases to near basal levels after implantation.

The synthesis of most other types of glycoconjugates remains fairly constant during the implantation period. This indicates that hyaluronan plays an important role during embryo implantation whereas other molecules increasing viscosity do not. This has been demonstrated by adding human placental collagen or high levels of albumin to increase the viscosity of transfer medium, without improving implantation or pregnancy rates.

Hyaluronan has repeatedly been shown to have an implantation promoting effect in humans. The unique combination of hyaluronan and human recombinant albumin in a transfer medium (EmbryoGlue) results in improved pregnancy- and implantation rates1, 2,3 as well as live birth rates4. It has also been shown that EmbryoGlue reduces miscarriages rates5.

The role of Hyaluronan in ART 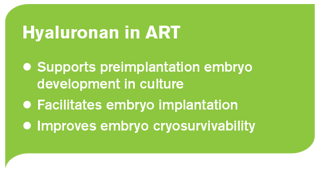 How does hyaluronan promote implantation?

What are the mechanisms behind this implantation promoting effect? Unfortunately there is no clear answer to this, the exact role of hyaluronan has yet to be elucidated. However, there are several possible means by which hyaluronan could facilitate implantation.

In a recent and very interesting study6, Buck et al. (2017) presented a completely new hypothesis for the implantation promoting effect of hyaluronan. The aim of this study was to investigate the effect of hyaluronan enriched media (EmbryoGlue) on human embryo gene expression and endometrial attachment in an in vitro model. The authors suggest that EmbryoGlue may increase pregnancy rates by up-regulating genes important for implantation.

They found a significantly higher gene expression of MMP9, which encodes a protein involved in extracellular matrix degradation, and MYD88, which is an adaptor protein enabling downstream signaling from TLR4 of pro- and anti-inflammatory cytokines that may help to create a favorable environment for implantation. This may represent a mechanism behind the increase in pregnancy rates when EmbryoGlue is used as a transfer medium.

Hyaluronan plays an important role in EmbryoGlue, the most studied embryo transfer medium in IVF. EmbryoGlue has been part in numerous studies and has also been part of two Cochrane meta-analysis, where it was found to increase live birth rates. EmbryoGlue is a medium developed exclusively for embryo transfer and the only existing product with a proven implantation-enhancing effect1, 2, 3, 4, 5

Introduction Cryopreservation or cryostorage of gametes and embryos …
END_OF_DOCUMENT_TOKEN_TO_BE_REPLACED

This is an abbreviation of Jason Swain (2019) publication with …
END_OF_DOCUMENT_TOKEN_TO_BE_REPLACED