In recent years blastocyst vitrification has become a very common embryo cryopreservation method. Our support embryologist Dr. Jakobsson is often asked about the necessity and importance of collapsing blastocysts before vitrification. In this blog post she will go through published studies on the topic and provide you with an answer.

Dehydration before vitrification is necessary

Blastocysts often collapse spontaneously during manipulation, for example during pipetting. But if this does not happen blastocyst collapse can be induced either by a laser pulse between two trophectoderm cells or by introducing a narrow pipette into the blastocoel.

Meta-analysis on the effect of blastocyst collapse

At ESHRE 20172 my colleagues presented a meta-analysis on the effect of blastocyst collapse. It identified articles published before January 2017 which involved a comparison with and without induced blastocyst collapse of human embryos before vitrification. Six articles met the search criteria of which only one was prospective. The analysis was performed using MedCalc®17.04 with p-values <0.05 considered statistically significant. The results are presented in the table below.

It should be mentioned that the single prospective study showed a difference in survival favouring blastocyst collapse (p<0.007) but did not show the anticipated increase in pregnancy rate as obtained from their power calculation.

An article which was not included in the meta-analysis above investigates artificial shrinkage of the blastocoel using a laser pulse3. An Octax laser was used and a single opening was created using a single 300µs pulse. 5.8 minutes after the laser pulse the blastocoel shrinkage was completed and the blastocysts were vitrified.

The results included 424 vitrification cycles containing 1110 human blastocysts. Artificial shrinkage was performed on 663 blastocysts and compared to 447 untreated control blastocysts. An average of 2.1 blastocysts per patient were transferred for both groups. 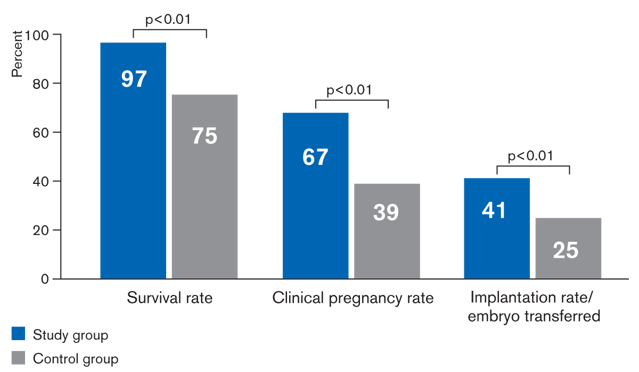 As can be seen in the graph above, survival rate, clinical pregnancy rate as well as implantation rate per embryos transferred were all significantly  improved by artificial shrinkage (p<0.01).

Comparison between ability and speed of re-expansion after warming

Yet another publication on the same topic was by published by Kovacic et al. in RBMOnline in January 20184. The aim of their study was to evaluate and compare the ability and speed of re-expansion after warming between the two groups of vitrified blastocysts, collapsed or not but also within each group to differentiate between those blastocysts that resulted in live birth and those that did not. This was achieved by measurements of blastocyst area every 5 minutes.

The embryos were cultured and observed using Primo Vision time-lapse system. The recovery of warmed blastocysts was recorded during approximately 140 minutes. A blastocyst was considered viable after warming if it contained at least half of the intact cells grouped in a compact cell mass and if a blastocoel started to expand within 1 hour after in vitro culture.

Closing of the trophectoderm layer is a prerequisite for re-expansion

The prerequisite for blastocoel re-expansion after vitrification and warming is the closing of the hole in the trophectoderm layer. Despite the more marked shrinkage of artificially collapsed blastocysts they filled with fluid significantly faster. Thus it seems that reorganising the cohesive layer and restarting the pumping mechanism on the inner membrane were not problematic in these embryos.

As pointed out by Kovacic et al., other studies have shown5 that warmed blastocysts with faster blastocoel expansion had a higher implantation potential even though this was not seen in this limited material.

So is it necessary to collapse blastocysts before vitrification?

The blastocysts that are vitrified usually differ by expansion, cell number, zona thickness etc. Thus, is it necessary to collapse blastocysts before vitrification? I guess the answer is no, it is not necessary and high survival rates are obtainable also with intact blastocysts, but according to the meta-analysis and other publications the survival rate is significantly higher if blastocysts are collapsed.

This may be due to a more controlled dehydration process of the different types of blastocysts. And if it proves correct that collapsing of blastocysts also results in faster re-expansion after warming and possibly a higher implantation potential then why not spend the extra minutes and do it?

Finally, it is clear that more randomised controlled trials, also including time-lapse studies and information on live births, are needed to provide an optimal evidence-based method for vitrification of blastocysts.

Learn more about how to succeed with vitrification

Download the white paper “How to be successful with vitrification” to learn more about factors influencing high survival rates.

Ann-Helene has a PhD in Genetics and started her career in IVF as Lab Manager at the private clinic Fertilitetscentrum in Sweden. Ann-Helene is a popular lecturer at Vitrolife workshops where she makes complicated matters easy to understand.

Vitrification has in recent years become the cryopreservation method …
END_OF_DOCUMENT_TOKEN_TO_BE_REPLACED

During the Vitrolife Scientific Symposium at ESHRE 2017, we had the …
END_OF_DOCUMENT_TOKEN_TO_BE_REPLACED

Vitrification and warming are operator dependent techniques. You …
END_OF_DOCUMENT_TOKEN_TO_BE_REPLACED